In Danville, the big debate for the end of 2019 are the two proposed referendums. Referendums are complex and confusing for the majority of the public, including myself. Years ago, voters approved a statewide property tax cap of 1% for residential, 2% on farm/rentals, and 3% on commercial. Since these property tax caps went in place, it has hit school funding hard (depending on the area). A large number of school districts across the state have been putting local tax referendums on the ballot in order to raise additional money to operate, maintain, and provide staff raises. In 2018 Avon Schools passed theirs (after having one fail a few years back), and in 2015 Brownsburg Schools were unsuccessful in passing theirs.

So what does Danville Schools referendum look like? It consists of 2 separate referendums, one smaller tax increase for teacher pay, and a much larger one for maintaining buildings, and updating facilities.

You can find a significant amount of information provided by the school system here: https://www.danville.k12.in.us/domain/221

As far as the opposing views, the biggest issues being voiced are the effect on seniors and those on fixed incomes, the overall size of increase on residents, effects on renters/farmers, citizens questioning the need for many of the proposed school improvements, and more. After Brownsburg's failed 2015 referendum, the school found a way to fund their needs without tax payer increases, so many voters are saying Danville should follow suit.

I'm not here to take sides on the issue, but both sizes have valid points. Be sure to do your research before voting.

What will the referendums effect be on local Real Estate? It's no secret that strong school systems have an impact on home values. Those with kids looking to move into new areas typically look at school systems as a big factor in their decision. If it passes, it will likely benefit homeowners in the long run, but people might be cautious on buying until the new tax bills come out in April 2020. But some home buyers might instead opt to look at other school districts with more reasonable home prices and property taxes.

If it doesn't pass I still see home prices steadily climbing in the coming years. Danville is still very affordable. Avon, Brownsburg, and Plainfield homes are getting more expensive, busier school systems, and more traffic. There will always be home buyers looking for smaller communities, smaller schools, and quiet neighborhoods.

Using the schools calculator here is an example of the increases for a $150,000 property based on if its owner occupied, a rental/farm, or commercial. You can see a much larger tax increase those who's property is not owner occupied. 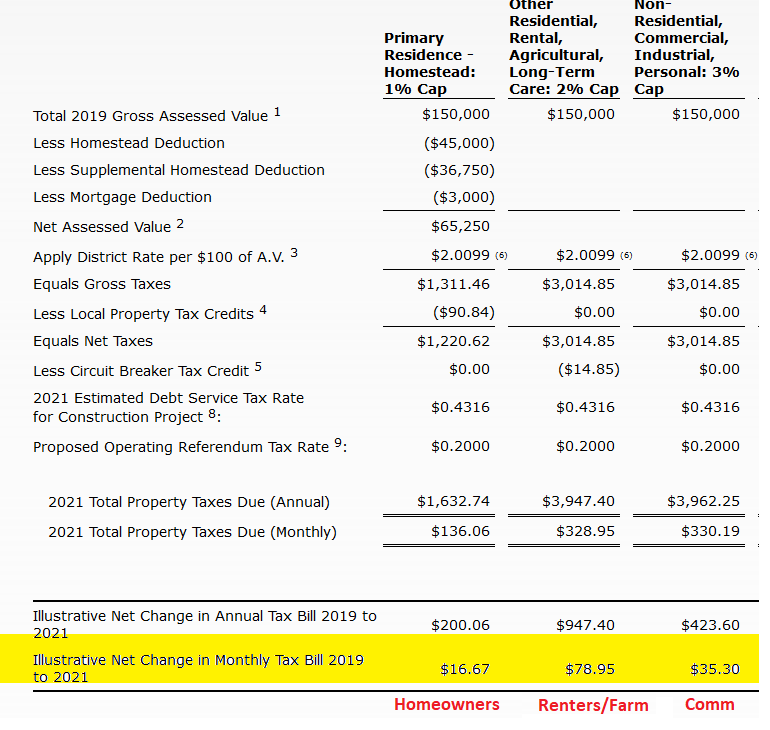 Homes in Hendricks county are not affordable. Our rent is cheap at 950 per month. If this theft is allowed, the average is going to hit 1200 per month. The referendum is just a way to skirt the tax caps. They paid someone with tax money, to tell them that taxes need raised. It is unfortunate that I had to hear on the radio, that should the residents of Danville allow this, Danville will turn into a "tumbleweed" town. This referendum is the result of poor planning. If we knew that obsolescence was going to degrade the facilities, then why wasn't a fund created to prepare for this inevitability? No! Let's just jack up the cost of living and drive out people who work in the service industry. You try to pay 1200 a month on part time wages. Walmart gets more of a break than the citizen. Raising taxes is the lazy way to deal with a problem that has been coming on for years. Since when did community schools become farm teams for professional sports? Big tracks, immaculate fields, and hugely expensive swimming pools are not the signs of a successful education system? They take away everything but pet projects so they can brag that they are the town in Hendricks with the best of the best in sports facilities. Should this theft pass, my family and I will be searching for cheaper digs. I know they won't mourn our leaving, as their snobbery knows no bounds.

Byron, It's amazing you can be that stupid from your completely made up rent increase number to your complete lack of public education funding challenges. Where was this "fund created" you mention supposed to come from you moron? The money is being siphoned from public and given to charters and private school and I bet you will continue to vote for the same asshole that keeps doing it. You're the problem, an uninformed person who unfortunately has the right to vote. I hope it does pass, let's get your gene pool out of Hendricks County. And if you're paying $950 rent, you're an idiot you could get a mortgage for considerably less. Oh that's right, we established your stupidity already. None of this work would mean DCSC has the best sports facilities, not even close. You aren't paying much attention to the districts to the east that have built 100 million dollar High Schools. You're just dumb.

This has got to hurt you. And, honestly? Yay! Are you a union trudge? Your ad hominem attacks on me, show how weak your argument for this travesty is, actually. I don't know you personally, but I'm sure you are triggered. This community means a great deal to me. If Danville had voted for this, it would show the hypocrisy of those that voted for Mitch Daniels back in the day. We capped property taxes to prevent this kind of theft, and all they've done is find a way to skirt them. I'm glad you're mad, I'm glad you don't like me. I'm really glad I don't know you. Your opinion, like mine is only singular. The schools lost, the people won, yay Democracy! At least I'm not afraid to put my name out there, coward! Go crap on someone else's lawn...piker. Informed citizen? Your desire to start a relationship with me is comical, I don't date outside my gene pool or gender.